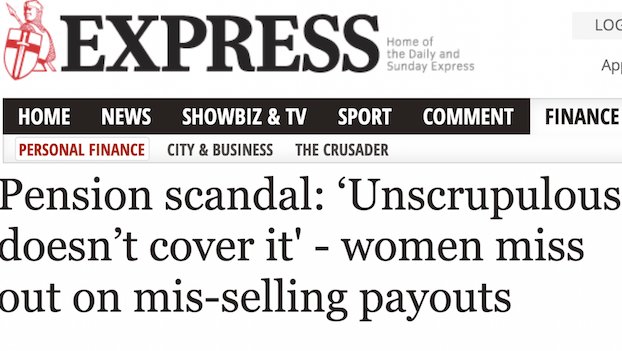 Our Managing Director Sarah Stokes spoke to The Express today about Women Missing Out on Pension Mis-selling Payments.

This is an issue that Pension Claim Consulting have been trying to create more public awareness about.

We’ve been aware for sometime now that the number of complaints raised by women in respect of pension and investment mis-selling is somewhat disproportionate compared to men.

This is despite the fact that pension mis-selling can affect anyone of any age, income level and gender!

Why are Women Missing Out on Pension Mis-selling Payments?

As Sarah says in the article…

“Critically, women aren’t seeking financial redress when they should.

“It is a situation that has been well known within the pensions industry for some time, but only now have we had the concrete figures which illustrate the problem.

“We would like to see this matter investigated by the financial regulators and at the very least, an awareness campaign put in place.

“Let’s not forget almost half of all personal pensions are held by women, so the disparity between men and women claiming, is quite striking.

“Over the last few years I’ve lost count of the number of women I’ve spoken with who say they were contacted out of the blue by an adviser who went for the hard sale as soon as they found out they worked in the NHS or teaching profession. Unscrupulous doesn’t cover it.”

You can read the article in full here.

If you think you may have been affected by pension mis-selling or would like to know more, we offer a free no obligation assessment.

It’s simply a chat with one of our team to assess some brief details which will help us establish if we think you may have a case.

See what our clients think of us on Trustpilot.