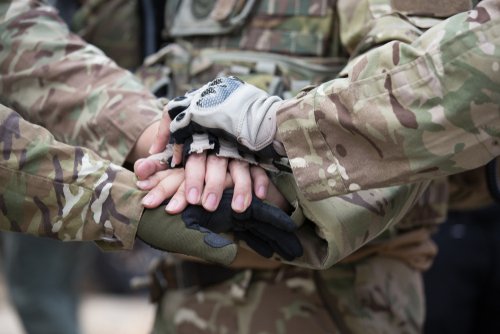 Unbelievably some of our heroes were purposely targeted and persuaded to transfer their pensions by unethical companies who made money from the transfer, Despite the fact it would cause thousands of pounds of losses to their retirement fund.

Mr G, 54, who served in Northern Ireland and the Gulf War joined the Armed Forces at 18. After leaving the army, the father of three, worked in numerous roles such as an armed maritime security guard on dangerous shipping routes, as well as security for Lenny Henry and The Black-Eyed Peas!

Mr G transferred out of the MoD’s Final Salary Pension Scheme into a Carey Pension after being approached by an unregulated introducer.

“The MoD didn’t really communicate properly regarding your pension and it was even worse once you handed your uniform back you were left in the dark.

“During our battalion reunions, there was a lot of talk about transferring out of the MoD’s Pension as you could get your money at 55 rather than 65. It’s attractive as you don’t know what’s going to happen tomorrow. I transferred after I got a Facebook message from a Financial Adviser or an introducer who wasn’t even regulated.”

“Once I found out I’d been mis-sold a pension, I was devastated.”

For many in Mr G’s position, it’s not just the amount of money they lost. It’s also how much their pension would have been worth had they not been scammed.

He admitted: “I had no idea how much money I’d lost … If I had stayed with my MoD pension after eighteen years’ service I would have built up a guaranteed income for life. Once I found out I’d been mis-sold a pension, I was devastated.”

We at PCC believe the true extent of the military pensions scandal is far worse than previously thought. Thousands of Armed Forces personnel, both serving and retired, were targeted prior to 2013 and up to 2015.

A freedom of information request revealed that between 2013 and 2015, around 3,600 former service personnel transferred out of the MoD pension scheme.

Dan Jarvis, Labour MP for Barnsley, who served with the Parachute Regiment has been vocal in raising this issues in the Parliament. Speaking to BBC Radio 4’s you and yours programme he said: “I think there are a number of failures. Clearly there is a very serious failure in terms of what these individuals were offered, but there’s also a concern that I have about whether there’s been a failure in the duty of care which the MoD has for those who served”

Want to know if your Pension Transfer may have been mis-sold?

We are currently representing over 200 Armed Forces personnel in compensation claims for unsuitable pension transfer advice.

If you transferred your pension and you haven’t already checked if you’ve been mis-sold – now is the time to do so.

If you’d like some help – we offer a free no nonsense no obligation check to see if you have a case or not.  It’s simply a chat with one of our team who are trained to identify a potential mis-sell by asking a few basic questions. That’s it!

It’s then up to you how you want to proceed if you have a case.

Find out what our clients think of our service on Trustpilot.